This week on a radio spot for the Rockin 25, I said that I believe Gonzaga is once again the team to beat this season. There shouldn’t be an argument like last season when half of the nation believed it was Gonzaga while the other half believed it was Baylor. I quickly also stated that there are 6-8 teams in the nation that are title contenders considering the single-game tournament style.

However, seeing Gonzaga play Texas (one of those 6-8 teams) Saturday only cemented my belief that they are the team to beat. The Zags and, more specifically, Drew Timme completely dismantled #5 Texas in such a way that it’s difficult to believe that anyone can hang with the Bulldogs. Timme poured in a career-high 37 points with 7 rebounds which were impressive enough but the manner in which he posted those totals was even more awe-inspiring.

The junior center shot 15-18 from the field and 7-9 from the line while simply outworking and out-positioning any and all comers. Texas head coach Chris Beard ran every big he had at the All-American with the same results. Timme was able to establish a deep position in the paint and once he received the ball he made finishing the play look remarkably easy nearly every time.

Without a doubt, there will be a group of people that will point to Timme’s flamboyance as a reason to dislike this team. Those people are the same ones that complain about NFL celebration fines and taunting penalties. From his fu Manchu to his DGAF attitude, this guy is on the court to do two things: kick hind parts and embarrass you while he’s doing it. He does both extremely well.

Drew is not the only reason to like this Gonzaga team, however. Lost in the big man’s dominance was the game that Andrew Nembhard posted last night. The senior point guard played all 40 minutes and scored nine points while handing out eight helpers. What was even more impressive was the fact that he only turned the ball over a single time. In 71 minutes played this season Nembhard has turned the ball over just three times.

Though last season’s perimeter threats Corey Kispert and Joel Ayayi have moved on, Rasir Bolton (7-10 from three) and, to a lesser extent, Julian Strawther (2-5) look capable of picking up the slack. The latter showed in preseason contests against Lewis-Clark and Eastern Oregon that he is capable of big shooting performances. 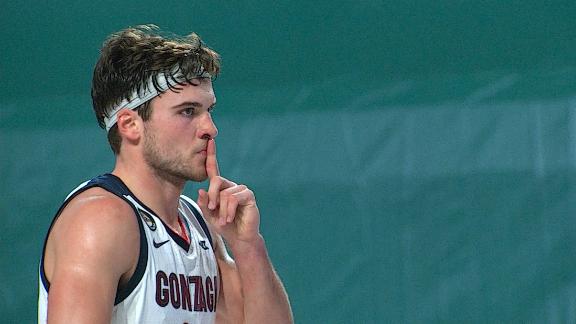 Celebrated freshman Chet Holmgren has not exactly lit up the scoreboard so far this season but that isn’t really his game. Instead, he has provided rim defense (9 blocks) and glasswork (18 rebounds) while playing within the flow of the game. Nolan Hickman has provided a nice spark off the bench while junior Anton Watson has done a little bit of everything off of the pine.

Why the Blue Devils Will Win March Madness

Duke basketball has a chance to win March Madness. Read this article and see how this season could be a big one for the Blue Devils. […]

The NIT will win big in 2021. As 2021 looks more and more like a simple continuation of 2020 everything in the world still seems upside down, college basketball just feeds that narrative. As we […]

The Alabama Crimson Tide host the Kentucky Wildcats for a huge SEC game on Saturday. This conference is loaded with great teams, and this will be an epic matchup. […]